"Terry Rogers lives out loud both with integrity and honesty– he’s a walking party that people want to join." 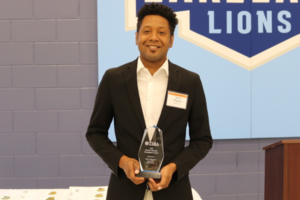 September 2022--Terry Rogers is named the Delta Region's TSBA Volunteer of the Year, advances as a state finalist.

Besides being a ‘walking party’, Terry Rogers and his wife set to work volunteering in our school district from the moment they enrolled at Riverdale. And for the past decade, the husband and wife team have served in various roles.

His first assignment was to emcee the Riverdale Addition Groundbreaking Ceremony. Rogers is no stranger to the stage–a performer on “Live at the Apollo” (2002) and a contestant on the first season of “So You Think You Can Dance” (2005) he enjoys time in the spotlight. “But honestly, I just like being where I’m needed,” said Rogers, who mentioned that it was mentors in his own hometown that inspired him to make time to invest in children. More than anything, he shared, he enjoys bringing people from diverse backgrounds together.

He’s often found in classrooms teaching dance routines for upcoming events or DJing the school dances. What people may not know is that the financial planner-by-day and local personality is also a legislative advocate for public education. In Forrest City, where he grew up and he and his wife Cameisha began their family, he served as an elected school board member for Forrest City Schools.

As his four boys aged out of Riverdale and moved onto high school, Terry and his wife moved up to the high school as well. On the HHS PTSO, they chair the Project Graduation committee–responsible for fundraising for and planning the penultimate drug and alcohol free graduation celebration for students. To date, they’ve raised about $10,000 for the event.

Noticing his talents for legislative advocacy, the GMC PTO (the school district’s PTO) recruited him as their Legislative Chair in 2018. Last month, he organized Germantown Municipal School District’s Day on the Hill. Thirty-two middle and high school students joined him and some chaperoning teachers, and others for a trip to Nashville. They met Representatives and Senators, toured the Capitol Building, explored the ‘new’ State Library and Archives, and participated in a mock session in the main House Chamber with Rep. Mark White and Rep. Kevin Vaughan. The group also met Governor Bill Lee.

His lifelong service to the schools is inspired by his wife’s devotion to servant leadership. “It was understood that to be with Cameisha, you have to be willing to serve the community,” he said. The two met in elementary school and were high school sweethearts.

Together, the duo volunteer in two PTOs, and help with different ministries at their church. He sees himself in the children that he works with. “No matter their background, they need attention. These days kids have more anxiety and stress and I want to make a difference in their lives,” said Rogers.