Cheer and Pom compete at state championships this weekend 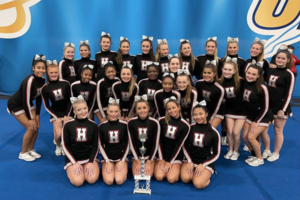 November 2022--Congratulations to our Houston High School Silver and Black squads who walked away as Champions with bids to national competition this spring.
Walking away from Regionals with 2nd place in Pom, 4th in Game Day, and the Best Costume Award, our Houston High Varsity Pom Team gave amazing performances.
Our Houston Middle School Pom Team was named the UDA Regional Hip Hop Champions. Both the large and small Cheerleader teams from Riverdale and Houston Middle School also received bids to the National UCA championship.
Here is a specific breakdown of what went down at this weekend's state championships:
A special thanks to all those who attended the Cheer/Dance Show Night to cheer on our teams as they headed into the state competition this weekend.