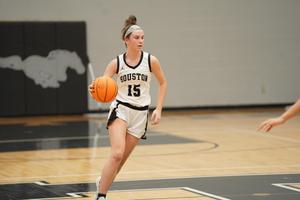 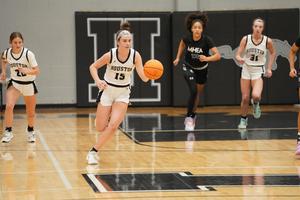 January 2023 - Right after Christmas, junior Anna Lee Avery had a double-double with the highest scoring game of her career.

In December, the girls varsity basketball team competed in tournament play and saw several victories. December 29, was a game that junior Anna Lee Avery will always remember. The lady mustangs were facing off against Memphis Central, and Anna Lee had a career high of 41 points. Not only that, but she also had a double-double with ten rebounds.


During the game Anna Lee said that she knew she was having a high scoring game, but she didn’t realize quite how good of a game she had played until afterwards. She said, “I believe I scored the first eighteen points of the game.” At the end of the game, she was told how many points she had scored. She said, “I didn’t know it would be 41 points, but I knew it was a lot.”


Anna Lee also shared that basketball has taught her so much more than just how to play a game. While she does recognize how competitive she is, she shared that through this sport she has learned that, “Hard work really does pay off.” This career high was the perfect example of that. Anna Lee began playing basketball at around the age of five years old, and she still works hard alongside her teammates today.


The girls varsity basketball team has an overall record of 13-6, and they play St. Benedict on Monday, January 16, at 6:00pm as an away game. Congratulations to Anna Lee Avery, and go mustangs!